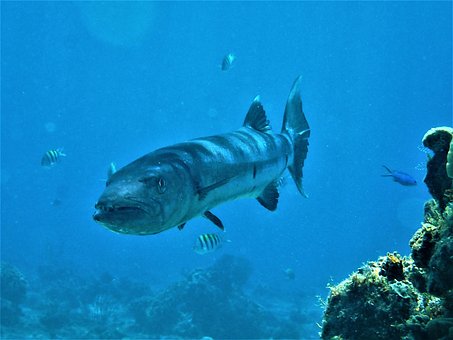 Barracudas are among the most unique fish in the world. They’re popular sea predators that eat a lot of smaller fish, such as tuna and herring. The fish has a bad reputation for challenging fishermen and stealing their prized catches while fishing.

They are also known for having a large mouth with a set of jagged teeth that scare away scuba divers and snorkelers. Out of curiosity, you might be asking yourself: “can you eat barracuda fish?”

This depends mainly on the barracuda fish in question, whether it’s big or small, as well as the environment where it grows. In today’s article, we’ll dive in deeper to find out whether barracuda fish are edible or not. So without further ado, let’s hop in!

What Is a Barracuda?

A Barracuda, also known as “cuda” for short, is one of the most popular large predatory fish in the world.

The fish is known for its slim, snake-like, fearsome appearance accompanied by a set of large, sharp, fang-like teeth.

Barracudas are mostly saltwater fish that belong to the genus Sphyraena, the only one in the family Sphyraenidae. They have small scales covering their body with no spines over gills.

For the most part, barracudas have dark gray, white, or blue upper bodies with shiny silver sides and white belly.

Where Do Barracuda Live?

Barracudas are among the types of fish that occur almost worldwide in tropical and subtropical regions.

The most common type of barracuda is the great or giant barracuda (Sphyraena barracuda), standing at up to 40 inches in length.

This one is common around the US in the Western Atlantic Ocean, extending from the coasts of Massachusetts all the way to Brazil.

The fish is also found in the Caribbean sea and Florida as well as the Indo-Pacific Ocean, Eastern Atlantic Ocean, and the Red Sea.

Although they mainly live in oceans, some great barracudas can also be found in brackish water.

As a rule of thumb, barracudas are poisonous fish although they technically don’t produce any toxic compound on their own.

This is precisely the case with almost all large predatory fish that live near the reef regions, such as barracudas.

According to the Centers for Disease Control and Prevention (CDC), the barracuda is at the top list of predatory fish you need to avoid for this reason. So how do barracudas end up being poisonous despite having edible flesh?

The problem here is that barracudas can pass along ciguatoxin that causes ciguatera poisoning, a disease that’s rarely fatal but can cause a slew of symptoms, including:

The toxin is produced initially by a certain type of unicellular organism called “dinoflagellate” that infests and breeds on specific types of algae deep in the ocean.

Barracudas are entirely carnivores, so they never eat the algae themselves. However, smaller fish, such as herring, anchovies, and tuna may consume the algae.

Barracuda’s bodies aren’t affected by the toxin, so their bodies didn’t need to develop a method to safely get rid of them, causing the toxins to accumulate in various parts of the barracuda, especially the viscera and gelatinous fats.

For that reason, it’s recommended that you avoid eating large barracudas at all costs because their flesh will likely accumulate dangerous amounts of ciguatoxin.

However, small and young barracudas usually don’t accumulate enough toxins throughout their lives, so they can be eaten in small quantities.

The barracuda has a significantly delicious flavor that can be “too fishy” for those who don’t like fish, but incredibly sought after by those who love eating fish like groupers and wild tuna.

However, it’s relatively milder than anchovies. The flesh is dense and meaty with low fat and large flakes and has an offwhite to a dark color

Barracudas often scare scuba divers and snorkelers by following them around and rushing in shocking speed towards their prey.

However, the harmless barracudas are just sight-oriented and being curious. it’s extremely rare for barracudas to attack humans and is more often than not by mistaking a shiny tool for a fish or to steal a fish from spearfishers.

Even in that case, the result will only be a single but very quick strike that’s often not fatal. These attacks are very easy to prevent with a simple set of precautions when diving in a barracuda territory.

The last documented death in the US by a barracuda attack was in the coast of North Carolina back in 1957.

How to Prepare a Barracuda for Eating

If you catch a barracuda yourself and it’s small enough or comes from an area where ciguatera poisoning is uncommon, you can actually prepare for cooking!

Keep in mind that the fish has a strong smell as soon as it comes out of water and can be incredibly slimy, so you have to be careful with the knife or leave the job to a professional.

Here’s a quick guide on how to prepare the fish and avoid the parts rich with the ciguatoxin:

Step 1: Using a sharp knife, make a tiny incision in the fish’s head under the gills to drain the blood and preserve the meat.

Step 2: cut the fish diagonally exactly behind the pectoral fin moving towards the head until you reach the backbone.

Step 3: Insert your knife at the top (dorsal) edge, then follow the trail of the backbone while keeping a steady hand to avoid wasting a lot of the toxin-free flesh. Move up until the knife is beyond the fish’s cloaca (the ventral opening) and reach the back fins.

Step 4: Twist the knife and firmly but carefully cut your way up, then lift the filler near the barracuda’s head and cut through the pin bones to separate the flesh.

Step 5: Remove the tail end (fin) with a slicing motion and flip the fish to the other side.

To avoid getting sick or getting ciguatera poisoning from a barracuda, make sure that you consider the parts you’re consuming. The flesh is the safest part and should be rinsed with water and brushed with lime.

Avoid eating the parts where the toxin is highly concentrated, such as testes, ovaries, small intestines, and above all, the liver.

While seasoning the fish, add the following seasonings, as they go very well with the flavor of the barracuda meat and texture:

How Much is a Barracuda

Barracudas are widely abundant in the sea and it shouldn’t be hard for fishermen to hunt them down even with their ferocious behavior.

However, since only the small barracudas are good to eat and it takes a long time to prepare and clean a barracuda for eating, a pound of barracuda fillet might set you back anywhere between $15 to $20.

Keep in mind that ciguatoxin is a heat-stable toxin, which means that it would still be effective even after cooking.

For that reason, it’s extremely important that you only deal with trustworthy fish markets and fishermen to make sure that the fillets aren’t from the larger and more dangerous barracuda.

Does Barracuda Have A Nutritious Value?

There are many claims that consuming barracuda meat has multiple health benefits for humans. These benefits include:

Some of these benefits aren’t confirmed by any scientific evidence. However, barracuda meat contains a variety of nutrients that are abundant in marine creatures and seafood, such as:

With that said, you now have a complete guide that answers the age-old question “can you eat barracuda fish?”

Barracudas are unique fish in a variety of ways. And while they’re not poisonous themselves, they can accumulate dangerous toxins through ingesting them indirectly with time.

To avoid the negative effects of the ciguatera toxin, make sure that you only consume young and small barracuda fish only because these are the ones that are yet to accumulate so much in their flesh.

Also, make sure that you eat the least dangerous parts of the fish and steer away from the liver and head section because they contain the most toxins.