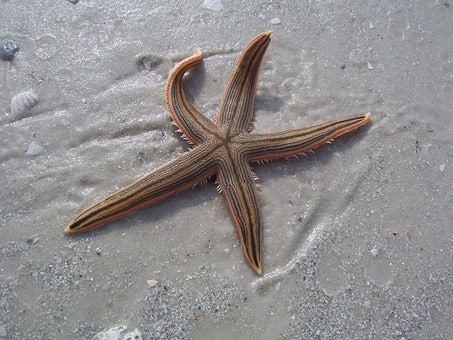 Can you eat starfish and how does it taste?

I’ve been asked more than once…”Can you eat starfish and how does it taste?” The short answer is yes, you can eat starfish and it tastes very similar to sea urchin. Click here to learn more about sea urchins and how many people love to eat them. Starfish have a  creamy texture like a sea urchin and will melt in your mouth with a salty ocean taste. Some people love that taste, others not so much. So, let’s describe the taste as “acquired”. As with all seafood, eat it fresh.

What is a starfish?

A starfish or sea star is an Echinodermata. “The adults are recognizable by their (usually five-point) radial symmetry, and include starfish, sea urchins, sand dollars, and sea cucumbers, as well as the sea lilies or “stone lilies”.  There are more than 1,600 species of starfish living today in the oceans.” Source – Wikipedia.

How does a starfish eat?

A starfish loves to eat seafood like clams and mussels (me too) and does an amazing thing to accomplish this. They will first push their stomach out of their mouth and then over the digestive parts of their prey…like clams and mussels. Digestion will start externally and then the starfish will pull back its stomach internally to finish the job.

A starfish has the amazing ability to regenerate its arms. If one of these arms becomes damaged by the means of a predator, they can regenerate an arm…amazing! This capability of course has helped starfish become abundant in many parts of the world.

How do you eat a starfish?

It’s time to eat! But be careful! Some starfish are poisonous. So, if you haven’t prepared a starfish before, it’s, of course, best to do it with someone that has done it before and knows if the particular starfish you wish to eat isn’t poisonous. Take a look at this video below. It took some time for this guy to prepare this starfish.

Another way to eat a starfish and to get right to it, is do the following:

You want to eat the “stuff” inside the legs.

Well, there you have it. Yes, you can eat starfish and you will find it as street food in many places in Asia. Many have described it as an “acquired” taste just like sea urchin, which I like.