How Do You Aim a Spearfishing Gun?

Spearos can never get enough of two things: exploring new waters and honing their craft. Spearfishing is a challenging sport that demands multiple levels of skill. You need to be a clever diver and shooter. In addition to a genuine ability to multitask.

In this article, we’ll get into deep details on how to aim a spearfishing gun for the best results. Plus, a few pros tips to get the most game fish each time you dive. So read on!

Where to Shoot a Fish With a Speargun?

The term ‘kill shot’ might sound a bit dramatic, and more relevant to a Hollywood movie. However, this is exactly what you need to practice in spearfishing.

Harming fish is cruel and should always be avoided. That’s the main reason we shoot to kill. Furthermore, a hurt fish would put up a struggle and fight you hard. Especially, if it’s a big one, and you’d have to finish it off with a knife.

Even small fish can be a hassle if they’re injured. Think about how you’d store your catch if it’s wiggling and thrashing. A much easier alternative is aiming properly and avoiding all this negativity.

Aim for the head at all times. If the fish is large enough, that shouldn’t be difficult. As for smaller fish, you could aim for its spine, which is the lateral line below its fin. Two things would help you significantly in achieving this clean shot. Standing close enough to your target, and practicing a lot.

When we want to get better at shooting a regular gun, we head to a shooting range and practice. The same thing applies to spearfishing guns. But instead of a shooting range, you should head to a pool or a shallow body of water.

You can suspend an air-filled nylon bag in the pool with a few weights and target practice on it. But make sure you’re not going to damage the walls in the process! You can adjust your aim from various angles and distances. And make any necessary adjustments to fine-tune your aim.

In a pond, river, sea, or ocean, there’s more opportunity to build your skills. For example, water isn’t as clear and free from currents as the pool. Also, there are many large and small objects that you can aim at.

Just make sure that you don’t target fish at all during this stage. It could be illegal at some places, and generally, that’s not the goal of this drill.

How to Hold a Speargun?

There’s a bit of science in holding the speargun correctly. The right stance should give you a good stable aim, and decrease the inevitable recoil to your body. As you hold a speargun, you should keep the following in mind:

How to Load a Speargun?

Loading a speargun should be an automatic process to you. And as you’re going to be performing it underwater most of the time, you should also make that skill a part of your training.

Here’s a summary of what you need to do:

All this applies to band spearguns only. If you’re using a pneumatic speargun, this wouldn’t be necessary.

Here are some tried and true tips for aiming a spearfishing gun.

What would work with big fish might not be suitable at all for smaller ones. The same applies to the kind of dive you have in mind. Heavy gear can be tolerated for brief dives on moderately deep waters. But that kind of gear would be exhausting if you’re free-diving all day.

A good aim comes from minimizing the guesswork. This includes your estimation as well as the water currents and the fish’s movement.

Try to position yourself as close as possible to your target.

3.   Stay Consistent With Your Shooting Style

The cowboy moves of shooting in all directions while riding a horse aren’t very realistic in speargun fishing. Try to learn one or two techniques and stick with them. Muscle memory pays off good dividends underwater.

There are a few exceptions of course, but these gifted folks aren’t the rule.

4.   Gravity Can Help or Hinder Your Shot

Shooting a spear while you’re surface diving would go downwards fast. That’s because it’s getting a little help from gravity. Contrary to that, if you’re in a deep dive, and you’re shooting horizontally, the shot might go weak pretty quickly.

Don’t disturb the fish. Don’t swim against them. And don’t make eye contact with them. Stay relaxed to the point of being a zen monk, this is good practice under the water and everywhere else.

Be vigilant and fully aware of your surroundings, you never know when a good catch would appear. Also, you’re not the only hunter in this game, and a bigger fish could be stalking you. So constantly scanning your perimeter is one of the habits that keeps you safe.

In gun spearfishing, we practice accuracy, strategy, and moderation. We practice hard, learn how to bide our time, and we never shoot what we wouldn’t eat.

This wraps up our guide on how to aim a spearfishing gun. Enjoy your favorite spot and stay safe at all times. 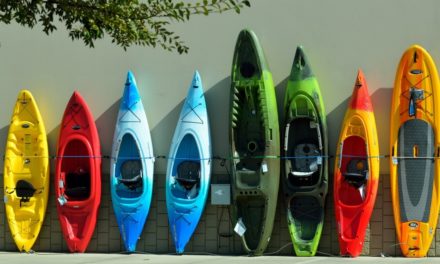 The Best Sea Kayaks for Spearfishing

Who Makes the Best Spearfishing Shafts?

Malta Spearfishing: The Best Places to Dive – Plus Tips for Fishing There