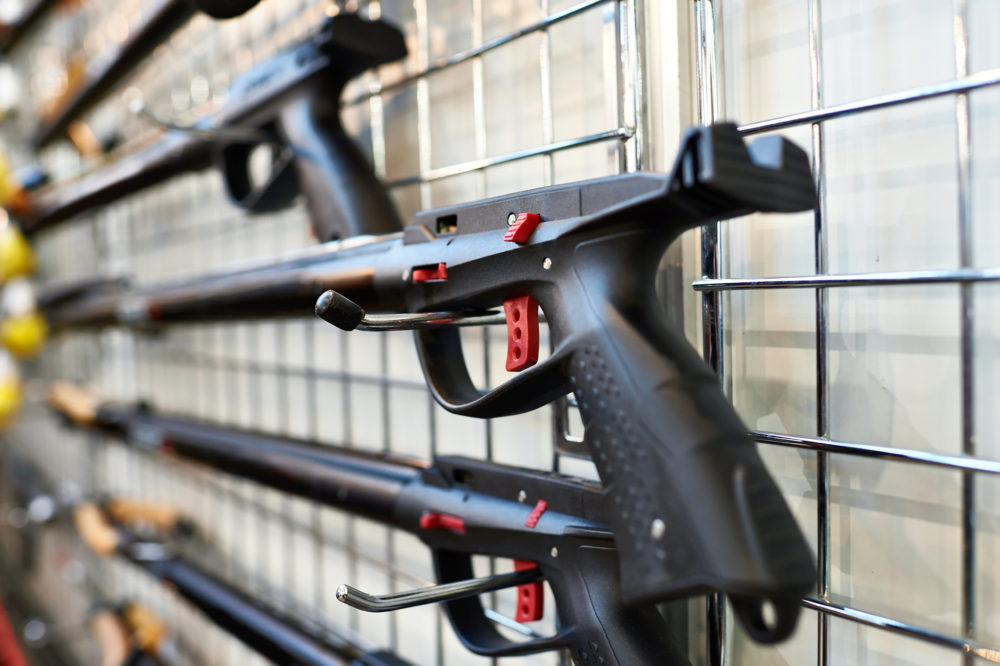 With its popularity growing rapidly following World War II, spearfishing, as we know it today, has been considered a sport since the 1930’s.

Although early civilizations engaged in spearfishing using poles and other tools, spearfishing today usually involves the use of a high powered speargun. This provides more accuracy, power, and makes it more of a sport than a necessity for catching food. But what’s the best speargun you can find?

Whether you’re new to spearfishing or you’re an old pro looking for what’s new on the market, you need to know the difference between the types of spearguns. You should also know how to choose your shaft, bands, and gun length.

In this guide, we’ll tell you everything you need to know to make an informed decision. Keep reading to learn more.

Pneumatic spearguns are one of the two types of guns that dominate the spearfishing market today. While widely popular throughout the 1960’s and 1970’s, they’re less desirable these days. Though they are still used as the primary spearfishing gun in some parts of the world. With a pneumatic speargun, the shooter experiences minimal recoil. They can also shoot their target from long distances. And they are capable of doing this accurately. Pneumatic guns derive their power from the air that’s pumped into the gun. This power is delivered through the pumping of the user. Which also means that the amount of power a pneumatic gun delivers is wholly dependent on the strength of the shooter. Most pneumatic guns use shafts that are 8mm in thickness. This makes them hard to bend and break. At this thickness, the shafts are capable of penetrating large fish.

When measuring a pneumatic gun, you measure from the handle to the very tip of the muzzle. The sizes range from 55cm to 135cm. Other common sizes include 70cm, 90cm, 100cm, and 110cm. In terms of loading, a small gun can be loaded by the shooter quickly. They’re also relatively easy to load compared to larger guns. In fact, larger guns sometimes require loading tools to assist in their loading.

Although not as popular as they once were, pneumatic guns are still versatile, accurate, generally compact, and very powerful.

You can find pneumatic guns with Hi-Lo power actuators as well. This makes larger guns easier to load. It also makes close-range shots easier to make.

To overcome the strength limitations of the shooter, special loading devices can be added to a pneumatic speargun. This reduces the strength needed to deliver the most power possible.

The shafts used in pneumatic spearguns exit from a large cylinder. Though they’re still accurate from long distances, and short distances with add-ons, this shooting mechanism makes them less accurate than their band-powered counterparts. Air in the cylinder is compressed, so it’s more difficult to control and in many pneumatic spearguns, the next shot becomes less powerful than previous.

These spearguns also make a lot of noise. When fired, the loud noise tends to scare fish.

These guns are more difficult to maintain than a band-powered gun. At times moisture can build up in the cylinder and prevent the gun from firing.

Lastly, many spearos will argue that they take longer to load than their band-powered counterpart. A big consideration when you have missed a nice grouper with your first shot for dinner and don’t have the time to reload.

Now the most popular speargun on the market, the band-powered guns shoot silently, provide consistent accuracy, and are more powerful than pneumatic guns. A band-powered speargun delivers its power based on the bands attached to the gun. The number of bands is increased to deliver more power and can be loaded by the shooter one at a time. The shaft used for a band-powered speargun is typically between 6.5mm and 7mm.

Just like a pneumatic gun, a band-powered gun can be measured from the handle to the tip of the muzzle. They come in 6 different lengths ranging from 50cm to 130cm. Other sizes include 75cm, 90cm, 100cm, and 110cm.

The Types of Band-Powered Spearguns

There are 3 types of band-powered spearguns.

True to its name, this gun is most popular in Europe. It’s easy to shoot and load and it’s also silent. This variation of band-powered spear gun is best for hunting fish less than 10lbs.

Bands for a European speargun are usually 16mm-20mm in thickness. The shafts are between 6mm and 7.5mm.

The main downside of this gun is how thin the shafts are. When hunting larger fish, they can bend or break. That being said I love using a European style gun in tight quarters, such as around rocks and in the middle of a kelp forest.

It uses shafts that are thicker than the European style so larger fish can be targeted. The shafts are typically between 7mm and 8mm. It’s also better for use when shooting at long distances.

The bands of this style of speargun are between 16mm and 18mm on a double band gun and 20mm on a single band gun.

These guns are accurate thanks to the rail guide system they employ. The rail ensures that the shaft is shot straight. However, the rail also makes these louder than European style spearguns.

You’ll find American style spearguns in the US, Canada, as well as Latin America. In these places, it’s the speargun of choice.

The shafts used in an American style gun run between 8mm and 9mm. These thicker shafts allow hunters to shoot big game.

And thanks to the balance and power of these guns, it’s especially capable of hunting large fish. These guns can be loaded with six bands or more. Making them more powerful than any of the others listed above.

But with increased power comes increased noise. They’re also usually made from wood, which makes them less compact.

Band-powered spearguns are highly accurate. For more accuracy, look for a gun with an open muzzle. This allows you to see the shaft pathway and aim with greater accuracy.

Unlike a pneumatic gun that derives power based on the strength of the shooter, the power behind a band-powered gun is independent of the shooter. Power is increased by increasing the number of bands.

As an added bonus, band-powered spearguns are completely silent. This means that fish aren’t scared away whenever the gun is shot.

You’ll have to buy gloves and a chest pad if you decide to purchase a band-powered speargun. This will protect you when loading your bands.

If you’re putting more than one band on your speargun, it’s going to take you more time to load the gun. Which means you’ll have to know how to hold your breath for longer, if you are freediving

The most important disadvantage of a band-powered speargun is in the thickness of the shaft. Because they’re thinner shafts, they have a tendency to bend when used on large fish.

You’ve probably heard that the bigger the gun, the bigger the fish you can hunt from a longer distance. That’s not necessarily true. There are a few things to consider when choosing the length of your gun.

First, think about the body of water that you’ll be shooting in. If you’re hunting in murky waters with less visibility, you should consider how far you can see in front of you relative to your gun size.

You also need to consider whether you’re hunting in caves and reefs. This kind of hunting requires the use of a shorter gun.

This should be obvious but the type of fish you’re hunting impacts the type of gun you use. There are specific guns for specific types of game.

Lastly, consider how experienced you are. Less experienced spearfisherman may want to use a long gun, which helps with accuracy. Those with more experience may like a shorter gun that gives them more of a challenge. That being said, it’s also important to consider what size gun you’re comfortable carrying around or more importantly hunting underwater with – a larger or smaller gun.

As noted above, speargun shafts come in different thicknesses. Consider what kind of fish you’ll be hunting before choosing your shafts.

For large fish, you need thick shafts that won’t break upon impact. You’ll also need a gun that can handle the thicker shaft.

For smaller fish, you can use a thinner shaft. If you’re hunting fish less than 10lbs, you’re safe with a 6mm shaft. Again, the gun you choose will depend on what thickness it can accommodate.

The material of shafts also varies. It’s recommended that you use a stainless steel shaft. Considering they’re constantly exposed to salt water, this material is most resistant to rusting and corrosion.

The tips you need are highly dependent on the fish you’re hunting. You can choose from pencil-nose tips and tri-cut tips. Some spearos also like each of these tips to have a breakaway system. This is where the point is attached to a metal line that breaks away from the base of the tip when shot into a fish. In many cases this point is used on larger game fish.

Pencil-nose tips are also known as rock point tips. They’re used for fish with thin or delicate skin that is easy to penetrate.

Tri-cut tips are for fish with thicker skin that is difficult to penetrate. You can also use them on sculled fish.

Buying a speargun requires some knowledge about where you’re going to be fishing and what kind of fish you’re hunting. When you know those details, you can pick your gun type, shaft, and points to give you the best chance against your prey. You’ll also want to consider your level of experience and how much of a challenge you’re looking for in terms of range and accuracy. Like most things, it can come down to personal preference and experience. I hope this guide was helpful and steers you in the right direction when picking you next speargun,

For everything you’ve ever wanted to know about spearfishing, check out our blog.