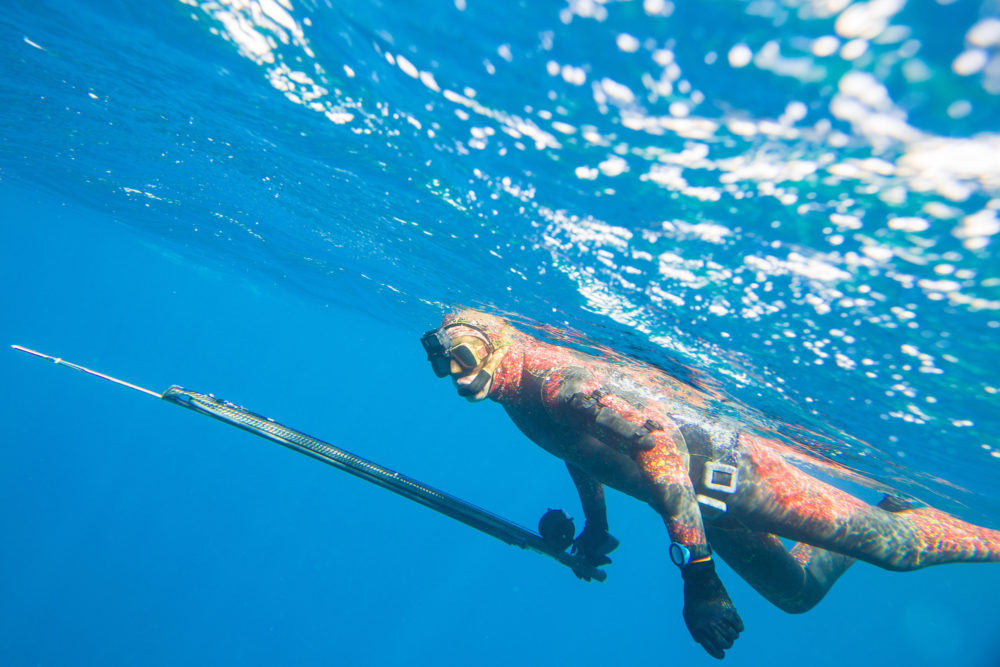 Are you thinking about trying spearfishing? Spearfishing can be a very fun sport. Read on to learn the top 10 + 1 spearfishing tips (updated) for beginners.

So, you’re getting ready for your first dive?

Or maybe you’ve gone on those first few fruitless dives where you’re getting frustrated.

Don’t give up yet, aspiring spearo, you just need a little bit of advice, and soon you’ll be getting to where you need to be.

We’ve compiled ten awesome spearfishing tips for the beginner. Take a look and see if we can’t help you get the big one on your next trip into the depths.

1. Don’t Get Distracted by Small Fry

One of the first mistakes which many spearfishers make is that they allow themselves to spend too much time chasing barely legal fish around in shallow water.

Try to get out to where the water is a bit deeper and look for larger fish. Around ten to twenty feet of depth is probably appropriate for the beginner who’s got their basic breath holding techniques down.

In doing so you’ll not only have a better chance of bringing home a real meal, but you also set yourself up to learn more quickly.

2. Stay Away From Dark Holes

Spearfishing is a relatively safe sport. Most of the fish you’ll be chasing aren’t all that aggressive. Even “fearsome” sharks rarely come after a diver, although they’re prone to going for prey you’ve already caught.

That said, some seriously nasty little creatures can give you a good wound out there if you’re not careful. One of the biggest risks for the beginning spearfisher are eels like the Moray.

Don’t stick your hand or arm in dark holes.

If you do manage to get bit, then you’ll want to keep as still as possible and let the eel let go. They have teeth which curve inwards, and you’re looking at some pretty nasty lacerations if you don’t keep your cool.

Knives are a real requirement when you’re spearfishing.

There’re two big reasons: you need to be able to cut yourself free if you get tangled up in something, and they can be used to finish off prey that the spear didn’t kill immediately.

You’ll want to keep it sharp. If you get tangled in a rope, net, or kelp when you’re low on air, you don’t want to spend the rest of your oxygen trying to hack at something ineffectively.

If you do need to finish off a fish, then drive the knife directly into their forehead and wiggle it. Going right behind the eye works very well. Depending on the fish the head can be tough to penetrate.  It’s much more humane than letting the fish die on its own.

Even if you’re experienced, spearfishing is one activity which you don’t want to do alone.

The biggest reason is shallow water blackouts. These can occur with no warning and occur in people across the board when it comes to freediving. The inherent danger is very real.

It’s also just a good precaution in case you get snagged or get caught in open water with something big and nasty. Most big predators will leave you alone if they can’t get behind you and you and a friend can safely ascend and retreat back-to-back.

While they can be a little bit harder to use a polespear can teach you how to stalk your prey much better.

They’re also comparatively cheap. If you’re just getting started, they’ll lower the investment cost in the sport quite a bit until you’re sure that they’re right for you.

When you’re using a polespear, you’ll have to rely on raw skill to get your fish since you’ll have limited range.

All of this adds up to making you a better spearo when you hit the water with a speargun later on. I love using a pole spear around rocks and working a reef. In many cases, you just don’t need the power of a big speargun. A big advantage with a pole spear is you’re able to reload quickly. There’s no question about it, you can get some large fish with a pole spear. You will also find that many experienced spearos love going back to a pole spear  Check out this article on how to use a polespear.

When you’re new to the sport, it can often seem tempting to just hop in and see what you can find.

Instead, ask around at shops and with anyone else you see who might be out spearfishing. They should be able to point you to some good beginner spots, let you know what the terrain is like, and inform you of any exceptional dangers.

If you just hop in you may have found an area unsuitable for your skill level. Rough currents and dangerous underwater terrain can ruin a trip or cause you to drown.

You’ll also want to know what kind of fauna you may encounter. While there’s not much risk from most animals, it’s better to know what you might run into than to be surprised while you’re already in the water.

7. Watch From the Top

Also, it’ll let you get a good breath just before you go down and give you longer to chase down the prize fish that you’re going after.

If you get lucky enough to find what you’re looking for on the ocean floor, then you’re really in good hands. Dive straight down over the fish, most of them have poor vision above themselves.

If you can’t find anything this way, then move on to the next tip.

The important thing is this: remember that you’re an ambush predator when spearfishing.

While we told you earlier to keep away from dark holes, you’ll want to explore larger terrain features. Many fish prefer to hide under ledges or in small caves.

Eels are mainly a problem in small, dark holes but if it’s big enough for you to fit in and you still have some visibility you’re probably going to be safe.

Under ledges, in caves, down in cracks. Many prize fish prefer to hide, and if you move slowly enough, you may be able to land one during the hunt.

It’s also a lot of fun to take a look around while you’re down there. Just keep an eye out, and you’ll be doing well.

Learning to aim with a speargun or polespear takes time.

One of the most helpful ways for a beginner to be closer to hitting each time is simple, however: don’t just aim to broadside a fish. Instead, carefully aim for a small spot.

Just behind gills and at the top is a great location on the majority of fish.

Think of it this way: aim small, miss small.

If you just go to broadside a fish then more often than not you’re just going to miss. By aiming for a specific portion, you stand a good chance of scoring a hit even if you don’t hit exactly where you intended to.

It also stands a good chance of making sure that you get a completely humane kill. More commonly called “stoning” a fish, the only way to achieve it is by hitting the brain or right at the base of the skull and breaking the spinal cord.

The farther down a fish you hit, the less damage you’ll do. Remember that fish have their spines along their lateral line, not necessarily along the top of their back.

Get the right gear the first time around. You’ll save money and have a much better experience once you hit the water.

There’s not a whole lot you need to get started, but at the very least a spear, low volume mask, and a wetsuit with weight belt will get you started.

Later on, you can choose more specialized gear. Many spearos vary their equipment quite a bit depending on the location that they’re hunting in.

Do the research, ask around, and make sure you have the right gear.

Some of it’s essential, but a lot of it will just make your life a whole lot easier once you get under the waves.

Your preparation really does begin with the choice of equipment that you’re using.

Staying calm when spearfishing is probably the #1 tip out of all the previous tips. When staying calm you are less likely to spook a fish. Just relax and in many cases let the fish come to you…they will. Also, spearfishing is an active sport not just physically but also mentally. Staying calm will let you assess the situation you are in. That could be hunting a fish or getting out of a situation…rough waters, strong tides, etc.

Take These Spearfishing Tips to Heart

If you take all of these spearfishing tips into account before you set out and while you’re in the water then you’ll quickly find yourself reaching a new skill level.

Don’t be afraid to take courses in freediving or spearfishing either; they can help quite a bit. Many of us feel the need to be self-sufficient, but if you can suppress the urge, then you’re on your way to a bountiful catch and a great dinner.

We specialize in making sure you have the gear and knowledge to make sure that you can get the big ones while you’re deep in the blue.

When you’re ready, check out our blog to see just how much you can benefit from a few simple guides.