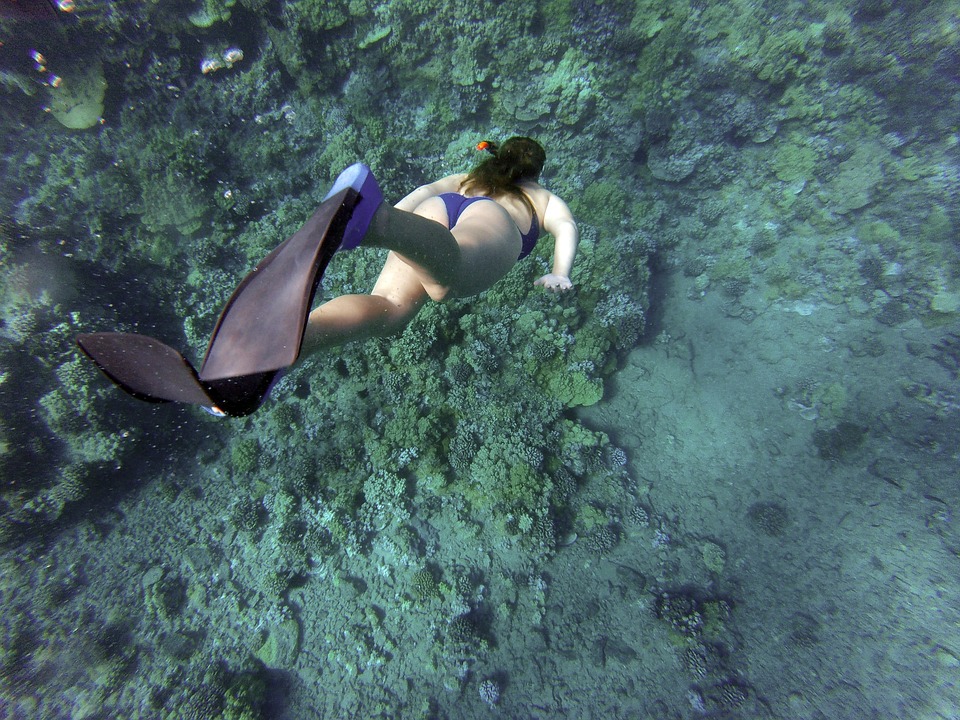 Spearfishing is one of the oldest forms of fishing known to mankind, but as time progressed and our species started creating innovative technologies to perform our day-to-day tasks, the gear you need to practice it has become very particular; so particular in fact that, in some countries, it is illegal to practice it in regular scuba diving equipment.

If you’ve researched spearfishing gear at all, you’ve probably noticed that the fins needed for it are peculiarly long. So, you might be wondering, why this length? And can you practice this dangerous watersport with regular, good old scuba diving fins? We’re going to answer your questions now, as well as tell you about some things you should take into consideration before buying a pair.

The Physics of It

As you know, spearfishing is a sport you practice while freediving (diving without a tank of oxygen.) That, by definition, is going to mean a few things.

For one, since you have no extra oxygen but the breath you hold in your lungs, it means you can’t afford to waste oxygen on inefficient propelling.This lead scientists to work on this simple equation: Inside this long fin, you have a really long blade with a thick base that starts at the bottom of your foot (under the foot pocket) and a thin tip that ends at the outer tip of the fin, giving you power when you propel.

The length of the blade means that, yes, you have to make more effort than you would when using regular scuba diving fins to propel, but the ratio of energy spent to distance propelled by a kick becomes higher. Meaning, per unit of energy, you advance more units in the water.

Now, you have to think of what that means to your underwater performance in case of spearfishing. Since you have no oxygen, your moves need to count for more distance travelled, because on a moment’s notice you might need to get to the surface for a breath and you can’t afford to move slowly, same thing if you’re experiencing a blackout from lack of energy or from the water’s pressure (yes, this happens.) Spearfishing is a dangerous sport that leaves no time for slow movement.

So, not only does it mean you propel faster, but it also means the total distance you propel is going to require less energy because of the blade’s unique build.

Scuba divers are advised to absolutely not dive with freediving fins because the longer and heavier fins will cost them more effort than their regular fins which will cause their legs to go sore over the long duration of their dive. Freedivers (and by extension, spearfishermen), however, are able to exert that effort and get a momentary break for their legs when they go to the surface to catch a breath. For a shorter dive, exerting more effort is not a problem.

There are a few things to consider, though, that might work against you with such a long blade. For one, if it is too stiff for your body’s strength, it will burn up all your energy and oxygen quickly to propel it. If it is too soft, it will not give you the kick you want out of a long blade.

So, when buying a fin, you have to consider your physical ability; the more muscular and bigger you are, the stiffer the blade you will need. There is a common myth that the deeper you’ll go the more stiffness you’ll need, but realistically, that myth doesn’t hold.

No Surface for You

Long fins are most definitely not for surface swimming. There really is no other way to put it: Don’t try to “multi-use” your long fins; swimming on the surface requires no fins or short scuba diving fins, period.

There is a variety of commercial long fins on the market and the price will vary depending on factors such as brand, country where it was manufactured, et cetera. The one variable that actually matters to you is the material of which it’s made. Polymer fins are cheaper but less efficient, so they are perfect for a beginner. Fiberglass and carbon fiber fins are more expensive, but are better at retaining their shape and stiffness through prolonged use.

Neoprene socks are extremely important for a spearfisherman because freediving fins often expose the toes and ankle (they’re not unlike sandals) which can cause hypothermia in cold temperatures, chafing from the edge of the foot pocket and potentially being bitten by jellyfish or other such creatures.

Some fins are sold with the foot pocket integrated into the blade, and some are sold detachable with clips and screws. Which do I buy, you ask? Well, it depends on what you need. Detachable is easy to travel with, of course, but some might not want to go through the inconvenient process of attaching them and detaching them before and after every single use. Consider what you’d rather go through: Traveling bulky or going through a tedious process before fishing?

Because of the dangers involved in spearfishing such as drowning, losing consciousness from the lack of air or pressure of the water on the lungs, we really do not recommend going into it unprepared, and part of that preparation is having the perfect pair of fins. You should consider your needs above all. Your body’s muscles and size should determine the stiffness of your blades, for instance.

The length of those fins is meant to give you a stronger kick and make the most use out of your oxygen and energy. If you have to use a lot of energy to propel a short distance, you won’t be able to ascend fast enough when you’re running out of oxygen, and that is a situation no one wants to be caught in.

So, consider your safety the first of your concerns. There is a reason why, in some countries, it is illegal to spearfish with scuba diving equipment. Long fins are inconvenient and bulky, but essential for any freediving sport.

What are the Best Fish to Spearfish? Your Complete Guide
A Guide To Spearfishing In New England
The Best Freedivng Masks For Every Need